Do you know?
From 2013-2015, NO CBSE candidate was given MBBS admission in any government medical college in Tamil Nadu under the 85% state quota. 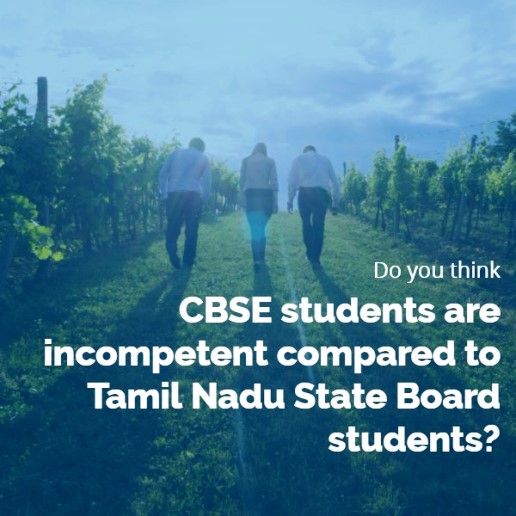 CBSE Students at a disadvantage?

Times of India reported in May 2013 that CBSE students are on back foot. The report highlighted that even with very high scores, a CBSE student has little chance of getting a seat for a professional course in a good college in Tamil Nadu.

It is no secret that State boards are lavish in providing marks to their students. Times of India, Kochi edition, reported in October 2014 that Nearly 50% CBSE students opt for state syllabus. Of course, what else would you expect when candidates in Kerala State Board scores perfect 1200/1200?

With centums and perfect scores being normal in the State boards, the only hope for CBSE/ ICSE students is a dependable, trustworthy and reasonable Normalization procedure. Tamil Nadu follows a normalization process, as recommended by Dr. Anandhakrishnan Committee, effective from the year 2007, soon after the entrance exams were abolished.

Tamil Nadu continues to use the highly unstable "Stretching method of Normalization" for preparing the Merit List for Tamil Nadu Engineering and Medical admissions.

Anamolies in the Normalization Method followed by Tamil Nadu

In Aug 2015, The Hindu, in its article titled Percentile-based ranking process, has highlighted that "The hustle and bustle in MBBS admissions this year against government quota seats in Tamil Nadu has brought to fore possible anomalies in the procedure currently followed for admission".

The Hindu, again in June 2016, published an article titled How about a percentile-based rank list?. In this article, the author has analyzed the advantages and disadvantages of "The Stretching method of Normalization", currently adopted in the Tamil Nadu Engineering and Medical admissions. The main disadvantage, identified by him, is that the method does not take into account the levels of average performances and the manner in which the performances differ from the average performances in the systems being compared.

The above discussion clearly shows that there was no real standardization of marks across the boards. This was clearly evident when I read the details of three students topping the Tamil Nadu MBBS Merit List 2016. Each one came from education in a different state, but still all scored a perfect 200.00 marks. The toppers came from Thiruvananthapuram, Vijayawada and Thiruvaiyaru.

With the above information in mind, I felt that CBSE students would be at a complete disadvantage competing against the Tamil Nadu state board students. To just confirm my thought process, I sought information from the Selection Committee, Directorate of Medical Education, Tamil Nadu through an RTI. I requested the admission details with a board-wise breakdown for the past three years (2013-2015). To my utter shock and disbelief, the RTI revealed the following harsh truth, worse than what I was expecting.

In the last three years (2013-2015), NO CBSE candidate was admitted to any government medical college in Tamil Nadu through the State Counselling Process.


The below snapshot shows the reply from the Directorate of Medical Education, Tamil Nadu revealing the admission statistics for the past three years. About 8% of the Tamil Nadu State board students got admission in the government medical colleges, while none from CBSE were admitted. Even the self-financing colleges show a mere 8 candidates joining in three years. 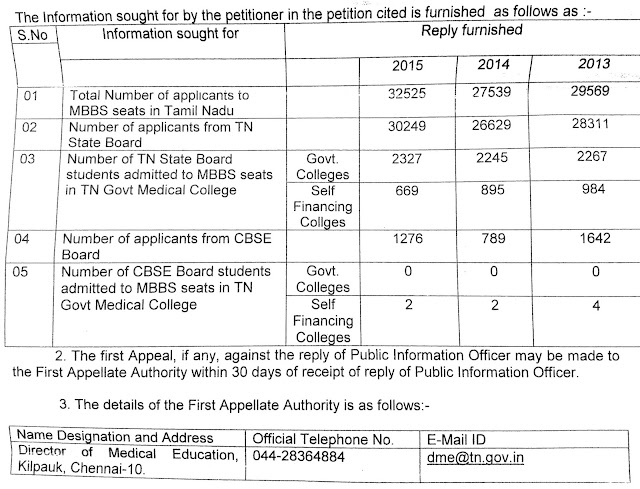 The above information is disappointing and demotivating for a CBSE student. There could be only two reasons for this poor state of CBSE students: either the normalization procedure is unfair to CBSE candidates (or) CBSE students are incompetent to join Tamil Nadu medical colleges. I am leaving the decision to the readers.

Is the Tamil Nadu government not keen on providing an equal and fair platform to students from other boards? Why CBSE is silently watching this? If you do not get any advantage or a level playing field even within your state, where else would you go?

Please share your views in the comments below. Your views will certainly help in understanding this statistics better.

December 09, 2018
When it comes to CMC Vellore, MBBS aspirants have tons and tons of doubts. Is there any special entrance exam for MBBS admission in CMC Vellore? Does CMC Vellore come under NEET? What is the admission procedure for CMC Vellore? What is the cutoff score for MBBS in CMC Vellore for the general category candidates? How difficult is it for a Hindu student to get MBBS admission in CMC Vellore? The purpose of this article is to address all these doubts. Continue to read the article; I will address all these questions in this article. Chapel About CMC Vellore Christian Medical College (CMC) Vellore is located in Vellore, a small town in the state of Tamil Nadu. It is located mid-way between Chennai and Bengaluru; about 150 kms from Chennai and about 200 kms from Bengaluru. Tirupati is also just about 100 kms away from Vellore. Dr. Ida Scudder founded the Union Missionary Medical School for Women in the year 1918, which later transformed into CMC Vellore. The prestigi
289 comments
Read more