However, an Ordinance by the Central Government overruled the Supreme Court Judgment partially. The Ordinance gave an exception for the year 2016 for the State Governments to decide the mode of admission for 85% state quota in government colleges. Further to this Ordinance, few State Governments like Delhi decided to continue the use of NEET scores as the criteria for admission. Some states like Karnataka proceeded with their state level entrance exams. Tamil Nadu used the board exam marks as the basis for admission.

Which colleges are covered under NEET 2016?

With all the above developments, NEET 2016 is applicable for admissions to the following:

Who can appear for NEET-II?

As per the directives of the Hon’ble Supreme Court of India dated 09 May 2016, the following three categories of candidates can appear for NEET-II examination: 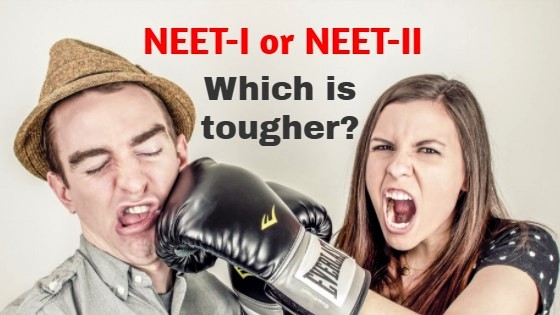 In our opinion, we believe that the intention of CBSE would be to have both exams at an equal level of difficulty. It is possible to have a different level of perceived difficulty, as the two phases are conducted under completely different scenarios. NEET-I was conducted when the students were still fresh from their board exams. NEET-II is being conducted when most of the students are tired and would like to quickly get the luggage off their back. The other argument was that NEET-II students had 3 months preparation time exclusively for the entrance examination.

CBSE should come out with a normalization procedure to even out the difficulty level, if any, between the two phases. In our opinion, it would be unfair to compare the raw scores of NEET I and NEET II. CBSE should use percentile scores similar to AIIMS/ JIPMER and combine the two results. This has proved to be a good system and would remove any bias of difficulty from the final rankings.

Number of Medical Seats in Tamil Nadu
The following is the list of 21 government medical colleges in Tamil Nadu. Overall, they have 2750 MBBS seats. Out of these, 2318 seats come under the 85% state quota. Admi…
254 comments
Read more

Continue to read the article; I will address all these questions in this article.


About CMC Vellore Christian Medical College (CMC) Vellore is located in Vellore, a small town in the state of Tamil Nadu. It is located mid-way between Chennai and Bengaluru; about 150 kms from Chennai and about 200 kms from Bengaluru. Tirupati is also just about 100 kms away from Vellore.

Dr. Ida Scudder founded the Union Missionary Medical School for Women in the year 1918, which later transformed into CMC Vellore. The prestigious college has excelled in providin…
267 comments
Read more

July 17, 2016
Do you know?
From 2013-2015, NO CBSE candidate was given MBBS admission in any government medical college in Tamil Nadu under the 85% state quota.
Do you think CBSE students are incompetent compared to Tamil Nadu State Board students? Are they not competent enough to join Tamil Nadu government medical colleges? Can they not match the Tamil Nadu state board students in studying MBBS? I do not know. But, that’s what the Tamil Nadu State MBBS admission statistics from the past three years (2013-2015) reveals. Please read through as I explain the difficulties faced by CBSE students in Tamil Nadu Professional Courses admission.


CBSE Students at a disadvantage? Times of India reported in May 2013 that CBSE students are on back foot. The report highlighted that even with very high scores, a CBSE student has little chance of getting a seat for a professional course in a good college in Tamil Nadu.

It is no secret that State boards are lavish in providing marks to their students. Times of Indi…
37 comments
Read more