December 06, 2016
AIIMS (All India Institute of Medical Sciences) is among the most prestigious medical institutions in India. It is the dream of every medical aspirant to set their foot into AIIMS New Delhi to pursue MBBS. However, there are only limited seats available. AIIMS New Delhi provides about 72 seats and the remaining six AIIMS Institutes provide 100 seats each.

So, it is always a huge competition to get into these institutes. This article is written to give you an idea of the ranks required to obtain a seat in AIIMS institutes. The opening and closing ranks for each of the seven AIIMS Institutes are given below for the year 2016. It will give you an idea about the pattern in which the MBBS seats were taken up at AIIMS in 2016. 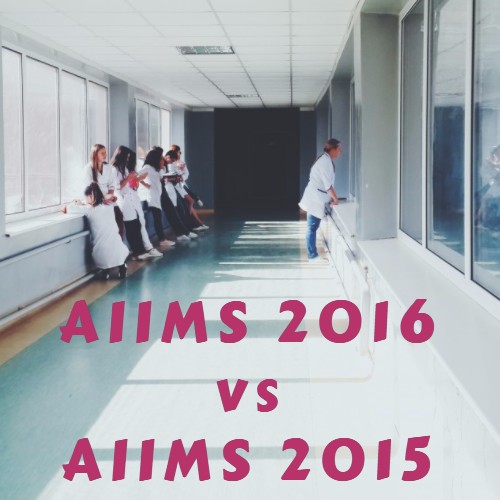 Let me caution you though, the scenario for each year might be different. For example, the delay in the NEET 2016 exam and the confusions prevailed following the results had a huge impact on how the AIIMS seats were taken up. Several candidates felt safe to stick to the AIIMS institutions rather than waiting for a good college through NEET exam.

Let us just take a look at the closing/ cut-off ranks for Unreserved (UR) category, as obtained in AIIMS 2016 vs AIIMS 2015.

As you can see clearly from the comparison above between AIIMS 2016 results and AIIMS 2015 results, the cut-off ranks went upwards in 2016. AIIMS New Delhi is consistent and it normally closes around 36-40 ranks at the most. So, no surprises there. But, all the other institutes saw an increase of about 500-1000 ranks, which is really a huge jump.

Don't read too much into the cut-off for AIIMS Patna. Though AIR 2949 obtained a seat in AIIMS Patna, I see it more of an anamoly. The previous rank to obtain a seat was AIR 1099, who took AIIMS Raipur. So, there was no one between 1099 and 2949. The candidate with AIR 2949 could have been lucky during the open round, as many candidates would not have appeared. As AIIMS insists on producing original certificates for counselling, attending open round is more of a lottery. So, for all practical purposes, you can consider that the cut-off rank is around 1100.

The above information were collected from AIIMS web site and presented here in an easy to read and understand format. We have taken utmost care to ensure the correctness of the data analysis. Please use this analysis for your preliminary guidance. Do your own checks before taking any decision or coming to a conclusion. We are not responsible for any inadvertent mistakes or errors in the above analysis. Moreoever, AIIMS may update/ revise the data, which may not be reflected here. Check AIIMS website for the latest information.

December 09, 2018
When it comes to CMC Vellore, MBBS aspirants have tons and tons of doubts. Is there any special entrance exam for MBBS admission in CMC Vellore? Does CMC Vellore come under NEET? What is the admission procedure for CMC Vellore? What is the cutoff score for MBBS in CMC Vellore for the general category candidates? How difficult is it for a Hindu student to get MBBS admission in CMC Vellore? The purpose of this article is to address all these doubts. Continue to read the article; I will address all these questions in this article. Chapel About CMC Vellore Christian Medical College (CMC) Vellore is located in Vellore, a small town in the state of Tamil Nadu. It is located mid-way between Chennai and Bengaluru; about 150 kms from Chennai and about 200 kms from Bengaluru. Tirupati is also just about 100 kms away from Vellore. Dr. Ida Scudder founded the Union Missionary Medical School for Women in the year 1918, which later transformed into CMC Vellore. The prestigi
290 comments
Read more