June 19, 2017
Since the time Supreme Court lifted the stay order and allowed CBSE to continue with the process of NEET, there is an air of excitement around the date when CBSE will release the NEET results. Students, parents, teachers, schools, coaching centres, media, web sites and several interested parties are waiting anxiously for any announcement from CBSE on the release of NEET results. 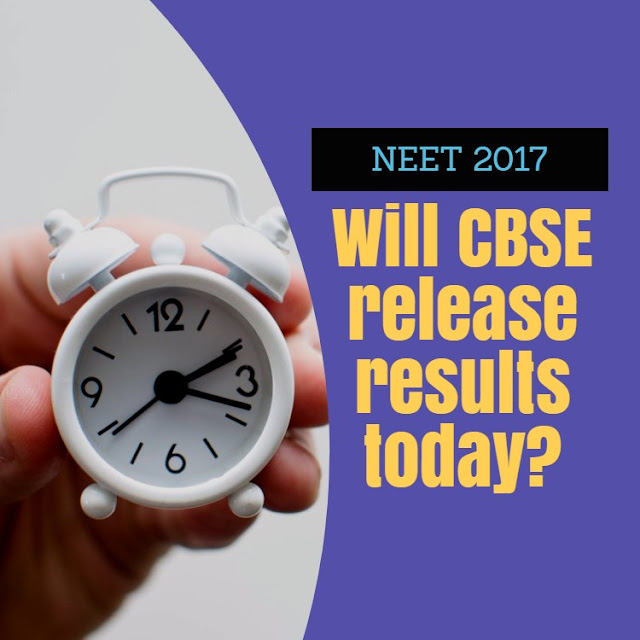 Several articles in the media and scrolling text in Television channels claimed that CBSE will release NEET results today, that is 19 June 2017. I even got information this evening that NEET results were already published; however, a quick check on the CBSE's NEET web site proved that its a fake news.

To put it straight, CBSE has not given any official announcement that results are expected today. So, all reports in the media are stones thrown at dark by some blind people. Guess works are reported as factual information, unfortunately.

CBSE, usually, maintains silence on matters like these. No wonder, we face several court cases related to NEET. Keeping the procedures transparent and disseminating the information well in advance is something that CBSE/ MCI should look forward to. This will remove the anxiety among students and parents. It will also give sufficient time to correct any mistakes by CBSE, rather than running to Supreme Court for each and every decision.

If not today, when will CBSE release NEET results?

In 2016, CBSE published the results exactly one week after the challenge of answer key ended. This time is needed for them to have a quick review on the OMR challenges and the answer key challenges. Going by that logic, the results can be expected by this Friday, 23rd June 2017.

So, let us hope that CBSE makes some announcement to calm down the anxious students. I believe that the results should be released any time between 21 June 2017 and 23 Jun 2017. My best wishes to all the NEET aspirants.

Continue to read the article; I will address all these questions in this article.


About CMC Vellore Christian Medical College (CMC) Vellore is located in Vellore, a small town in the state of Tamil Nadu. It is located mid-way between Chennai and Bengaluru; about 150 kms from Chennai and about 200 kms from Bengaluru. Tirupati is also just about 100 kms away from Vellore.

Dr. Ida Scudder founded the Union Missionary Medical School for Women in the year 1918, which later transformed into CMC Vellore. The prestigious college has excelled in providin…
258 comments
Read more

Number of Medical Seats in Tamil Nadu
The following is the list of 21 government medical colleges in Tamil Nadu. Overall, they have 2750 MBBS seats. Out of these, 2318 seats come under the 85% state quota. Admi…
254 comments
Read more

July 05, 2018
How does the reservation system works in Tamil Nadu, particularly with reference to medical college admissions?

First, let us look at what really confuses candidates and parents.

Vacancy Status at the end of Day 1 CounselingHere is the vacancy status that is published by Selection Committee, Directorate of Medical Education, Tamil Nadu as at the end of 1st July 2018 (after the allotment of 40 seats under special category).


If you look at the above matrix, there are 757 seats under Open Category (OC), which is 31% of the total seats available. You also can notice, each college has the same kind of distribution of seats using the following reservation system: