Who should we blame for the NEET debacle?

July 21, 2017
I witnessed a long discussion in Twitter today (and it was going on still). The topic was around why the state board students did not prepare for the NEET exam? Why did they believe the government/ the politicians? Why they did not think that Supreme Court has already mandated NEET and already the Central government has amended the Indian Medical Act to include NEET? Why they did not understand that the ordinance passed by central government in 2016 was valid for only one year? 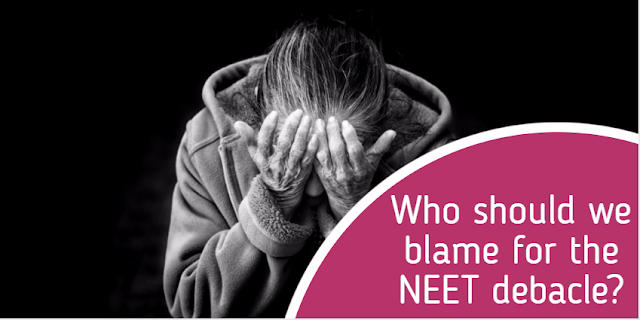 This article makes an attempt to answer the above questions. I know many would not agree with my views and will have different opinions. You are welcome to post your comments here, or come over to my Twitter handle or Facebook page to have a healthy and constructive discussion.

Why Tamil Nadu state board students believed that their state will be exempted from NEET?

The fact here is TN state board students were made to believe that they will be exempted from NEET permanently. When it seemed that is not happening, they came out with the Bills. All legal experts, educationists, politicians (including opposition parties) were confident that the Bills will ensure exemption from NEET. Time and again, the government was giving promises (even today) that NEET will not be used for medical admission.

With so much promise, state board students were confident that board marks is important and they concentrated to secure 200/200. Even those who went to NEET coaching were really confused what should they focus on. And, they did focus on the board exams.

Now the question: why did they believe the government and the politicians? And did not take the Supreme Court seriously? The simple answer is: they are from Tamil Nadu. It is a state that managed to do things differently from all other states.

It was the only state to not have any state-level entrance examination for a decade (though the Indian Medical Act required an entrance examination if the boards of examination are different). It was probably the only state to have 69% reservation (though SC has directed that reservations should not exceed 49%). It was one of those states to fill the reverted All India Quota seats using state merit list (though SC has clearly said that all those seats should be filled only using All India Rank).

So, there were enough precedents for the state board students to believe that the government will bail them out of NEET. And, you cannot blame them.

To be fair to them, their board marks were also important to them. In case they failed to make it to MBBS, they should have adequate board marks to secure them a decent engineering college. All other admissions in Tamil Nadu, except MBBS/ BDS, are based on board marks. It is not a state where you generally drop a year and pursue MBBS again. So, they were split between board and NEET.

Who should we blame for the NEET debacle?

So, who should we blame for the precarious situation Tamil Nadu is facing today? Its certainly the government, the politicians and the educationists. If only they all had just accepted NEET was here to stay and advised the students to focus on NEET? I am sure the state board students would have done much better and would have had a lion’s share in the total seats under government medical colleges. 52% could have become 72% or 82%.

December 09, 2018
When it comes to CMC Vellore, MBBS aspirants have tons and tons of doubts. Is there any special entrance exam for MBBS admission in CMC Vellore? Does CMC Vellore come under NEET? What is the admission procedure for CMC Vellore? What is the cutoff score for MBBS in CMC Vellore for the general category candidates? How difficult is it for a Hindu student to get MBBS admission in CMC Vellore? The purpose of this article is to address all these doubts. Continue to read the article; I will address all these questions in this article. Chapel About CMC Vellore Christian Medical College (CMC) Vellore is located in Vellore, a small town in the state of Tamil Nadu. It is located mid-way between Chennai and Bengaluru; about 150 kms from Chennai and about 200 kms from Bengaluru. Tirupati is also just about 100 kms away from Vellore. Dr. Ida Scudder founded the Union Missionary Medical School for Women in the year 1918, which later transformed into CMC Vellore. The prestigi
290 comments
Read more